The Beacon of Central Vancouver Island

The Bastion is an enduring local icon in the third oldest city in British Columbia.

Built in 1853, the three floors of the Bastion were skillfully crafted using traditional wood working techniques by workers of the Hudson’s Bay Company.  Over the years, politics and land deals saw this sturdy wooden fort moved twice. Today it is Nanaimo’s most recognizable landmark.

While the Bastion’s timbers are original, the interior represents activities of the early mining post from 1853 – 1862. Today, this former Hudson’s Bay Company building is a symbol of Nanaimo’s history. The Bastion is a “must see” destination for visitors to Nanaimo.

Please Note: For the 2022 Summer Season, the Bastion will be operating from July 1 – September 5 with limited hours. Please check Google for the most up-to-date Bastion hours. Cannon firings are cancelled until further notice. Group Tours are available for booking.

The City of Nanaimo handles Bastion Light-Up requests. Please visit their website for the application form: https://www.nanaimo.ca/your-government/city-council/bastion-lighting-requests, or see the colours in action with this Youtube Video: https://youtu.be/OdwX7Pf0plM

The second floor contains examples of the Bastion’s armament. As a defensive structure, the Bastion had two six-pount carronades for short range defense and may well have stored other firearms and gunpowder reserves. Along with the heavier cannons outside, their purpose was more ceremonial than defensive. The bell above the door on the outside of the second floor was originally mounted nearby on a nine metre pole, and was used as a signaling device, principally to announce the time, as watches and clocks were uncommon.

The top floor provided storage for supplies but was also designated as a place of refuge for Hudson’s Bay Company employees and families. Today there is a display of the many kinds of objects that miner-colonists would have brought from Britain, as well as a display of the tools and construction methods utilized in building the Bastion.

The Bastion was constructed using the pièce-sur-pièce technique which uses timbers laid atop one another horizontally with tenons cut on each end. The tenons are inserted into vertical grooves in the eight vertical posts, while the bottom sill log was set on a masonry foundation. The structure was built using basic hand tools: a crosscut saw, broad axe, adze, auger and pit saw. As nails were expensive, few were needed using this technique.

Logs were cut and squared nearby and hauled to the site and gaps between the logs were filled with chinking (straw or moss mixed with clay or mud) to keep out the rain and wind.

Originally, the Bastion was situated on the present-day location of the Dorchester Hotel parking lot.  However, by 1891, the land was sold and the new owner threatened to demolish the structure. A contribution of $175 from the city saved the Bastion and it was moved across Front Street. The Bastion was moved again in 1974 when Front Street was widened.

Restoration in 2010 repaired and replaced some of the ageing parts of the Bastion, although the majority of the timbers and other components of the structure are original. 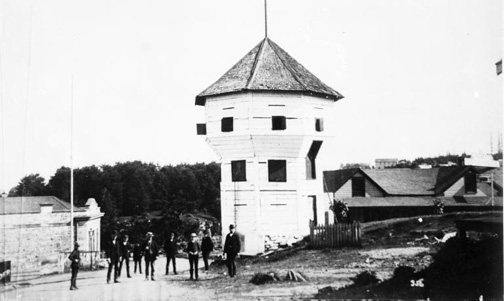 History of the Bastion

Nanaimo’s Bastion is the last remaining wooden Hudson’s Bay Company bastion in North America. Today, as the city’s oldest structure and recognized Municipal Heritage Site, and having survived multiple moves, renovations and changes in ownership, the Bastion proudly stands as one of the most enduring and iconic symbols of Nanaimo.

The first log cabins are built in Nanaimo and the first coal mining operation is established under the direction of the Hudson’s Bay Company. To protect miners and their families, a Company ship was anchored in Nanaimo’s harbour, however this expense soon led to construction of the Bastion.

Construction is started on the Bastion, which is completed the following year, in 1854.

A large flotilla of Kwakwaka’wakw paddling from the north appears in the harbour, sending residents to seek refuge in the third floor of the Bastion, one of the few recorded defensive uses of the Bastion.

The Hudson’s Bay Company’s licence for exclusive trade is not renewed, and three years later the governors of the Company sell the Nanaimo lands, buildings, machinery and mineral rights. 1863-1891: The Bastion is used intermittently by the colonial and later city governments, and, until 1871, is even used on occasion as a temporary jail.

The Bastion is saved from demolition by a contribution from the city of $175 which moves it across Front Street.

City of Nanaimo relinquishes its interest in the Bastion.

Management of the Bastion is taken over by the Native Sons of British Columbia, a fraternal organization dedicated to preserving BC history and pioneer values and traditions.

The Bastion is moved for a second time as Front Street is widened.

The Bastion Museum Society takes over management of the Bastion.

Renovation work is done on the Bastion and noon cannon firings begin.

Exhibits and meeting rooms from the Native Sons of British Columbia are removed as structural and fire safety upgrades are done.

Management of the Bastion is transferred to the City of Nanaimo, and the Nanaimo Museum recreates the Bastion’s interior to represent how it may have looked in the 1850s.

The Bastion undergoes major restoration work, and for over six months is completely dismantled with several original and substituted timbers replaced.